This recipe was developed while we were still living in Forest Hills, New York. The thought of celebrating the Jewish New Year was a culinary challenge. I wanted to gather apples, honey and saffron. With some knowledge of Moroccan flavors and Indian marinades, I made a fusion and the result has been always great.

This year, besides our playdate mates we had included other guests. The whole potluck was carefully prepared by all. The result was great. Besides chicken we had couscous, a lovely broccoli salad, and another style of chicken - with gorgonzola, which I will share with you later. For dessert apples with honey, Darienne's apple dessert and vanilla ice cream.

Kids were too busy running around and making their sculptures with apples and marshmallows. They also had the chance of tasting beautiful meatballs brought by a guest specially for them. But mostly everybody enjoyed the collection of flavors that were on the table. Shanah Tovah! 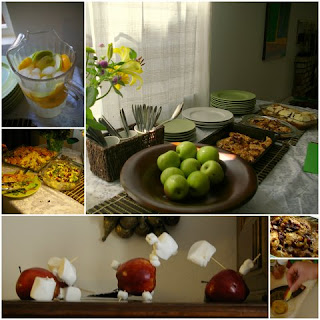 The yogurt marinade is the key to success with the chicken texture. I used a low-fat organic natural yogurt from Trader Joe's and that worked perfectly. A good saffron also helps. This year I found a very good one by Morton and Basset from Novato, Calif. Dried fruit plays a role too: This year we had a mix of cherries, cranberries and raisins.

Warm apple juice and add saffron and dried fruit. Reserve for later. In a big bowl whisk together yogurt, salt, olive oil and onion. Immerse chicken pieces and marinade overnight or a minimum of 6 hours.

Heat large skillet over high heat. Remove chicken from marinade; reserve marinade. Sear each piece of chicken, being careful to just bring the meat to the surface. If not using a ovenproof skillet, transfer the seared meat to a ovenproof dish. Cover with reserved marinade, and use the slices of apple as a top layer on the dish, to work as a lid. (You can store it in the refrigerator at this point to cook later.)

Posted by Darienne at 5:20 PM No comments: 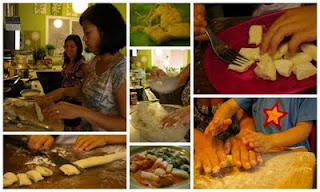 There's always something that stirs my soul and as a whispering force says: "When sunken in chaos, let creativity flow ". After few weeks with family and friends over and adapting my kitchen to all different tastes and home to diverse lifestyles, I needed something else as a challenge. And that, translated to a dish, is... Gnocchi. Something I ate many times but never dared to cook.

I searched for a reasonable recipe in all my favorite and hated chef's websites. But none satisfied me. I was looking for something lighter, and not potato-rocks - as usually the pre-made gnocchi are.

Excited by the possibility of having kids participating on the challenge, rolling dough and cutting the gnocchi, I started to work. For my surprise, the process was very engaging for all - including mamas. It included one batch of gooey gnocchi - a mistake for a too rolling boiling water. One of my boys ate it all. Three kids were not pleased with the gnocchi texture. But all of us grown ups ate a lot and found it just perfect.

Dessert brought a little more comfort to little ones. A big round slice of sweet watermelon and few shapes of cookie cutters made them very happy. Again with hands-on and having great moments shaping their fruit they left the house with high levels of fructose and mostly no other food. The same could not be said about the gourmet audience. We all rolled and ate those yummy gnocchi, and Darienne left home with one small ball to share with Calvin, our first cook of the kid's group.

As recommended by many of my favorite authors, I left all ingredients to at room temperature at the time of preparation.

Bake potatoes in oven or microwave. Let them cool, peel them and mash with a potato masher, or ricer to reach a creamy texture. Add salt to taste. Beat two eggs whites and add gradually to potatoes. In the meantime bring a large stockpot with water to a boil. Add plenty of salt and reduce heat to a medium- high, to keep the water very hot but not on a rolling boil. Close lid and let it on the stove. Now, back to the dough: fold in nutmeg, and mascarpone to incorporate all ingredients. Begin to powder flour gradually with the help of a strainer, and start to knead with the other hand while pouring flour. The dough should feel light to the touch, not so sticky but solid enough to be rolled into a cylinder. Flour surface and cut in 1 to 1/2 inches pieces, using the fork to stamp the top surface of each piece of gnocchi. Drop into the very hot water and take them out of the pan one minute after they emerge. Serve with your favorite sauce or just with good shredded cheese.
Posted by Anna at 2:54 PM 1 comment:

Tips and Gadgets: Kids in the Kitchen

Rookie Moms shares a great tip for getting kids involved with food prep: Keep a pair of safety scissors in your kitchen drawer and let your kids use them to cut up lettuce, soft vegetables, and more. There are a few other tips to encourage you to set efficiency aside and invite young ones to help get dinner on the table.

We found one of our favorite kid-friendly tools this summer at a cooking school for children. The Progressive lettuce knife is a serrated nylon knife perfect for kids who want to cook just like the grown-ups. It's blunt enough to be safe, but surprisingly good at getting the job done. My 5-year-old has used it chop up fruit, sausage, bread, and vegetables with ease.

Posted by Darienne at 1:50 PM No comments:

Labels: Darienne, Kids in the Kitchen, Tips and Gadgets

You can use it on pasta or gnocchi. And to attract a younger audience, you'd better say that you this is the one sauce that helped the famous cartoon sailor to grow strong. If they don't know yet who you are talking about, it is your chance to introduce them to Poooo-peee-ye! 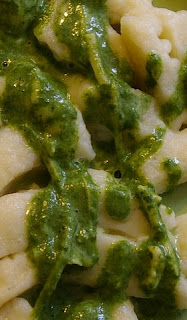 Fresh baby spinach from a salad bag will do wonders. If not available, it may be possible to do from frozen. Or from the spinach in the can - just like in the cartoon.

Simmer spinach with water in a sauce pan. When cooked and tender, stir in cream cheese, black pepper, Parmesan and black pepper. Turn heat off, add cream and process everything in the pan with a hand blender. Serve it with pasta or gnocchi.
Posted by Anna at 5:39 PM No comments:

It's been a weird summer in terms of weather, with a cold start and a steamy hot finish. The cherry tomatoes began appearing in July. Most of them have disappeared directly from vine to mouth -- my boys find them wonderfully sweet and tasty and pick them greedily. I rarely need to pick any myself, but I do need to hunt to find any left. Finn grabs empty strawberry baskets and heads out "to get my 'matoes," then leaves little half-filled baskets all over the yard.

My handful of heirloom tomato plants, however, have been slow to yield ripe fruit. It wasn't until late August that I was able to count on a few tomatoes each week. The most generous plant has been the giant persimmon tomato, yielding gorgeous orange fruits that can clock in at nearly a pound each.

Temperatures had been in the 90s for a full week. Between that and the late bounty of tomatoes, there was no question I'd be making gazpacho this week. I prepared it the night before, and by morning it was tasty but a little flat. Anna has saved several of my dishes in the past: I asked her to taste, and she recommended sun-dried tomatoes. Perfect.

To go with the gazpacho, I split a loaf of Pugliese bread in half and spread it with goat cheese, then spread some fresh basil pesto, and finally topped it with chopped sun-dried tomatoes. I popped that into the oven to toast a bit.

I tried making baked spinach balls in a desperate attempt to get my kids to eat something green. I added a bit of chopped lemon balm to make them more interesting to me, at least -- but they were left mostly uneaten. Couldn't get the kids to even try one. I ended up making some tortellini for the kids, dressed with a bit of the pesto, and they wolfed it down.

The kids didn't think much of dessert either -- balls of honeydew, cantaloupe, and watermelon with a bit of lime juice, honey, and mint. Must have been the flecks of green.

Gazpacho is very forgiving of experimentation. Play around with this one. You can puree it in a food processor or with an immersion blender. Some insist on straining with fine-mesh sieve, but I don't bother.

Tear or cut bread into 1-inch chunks and place in small bowl. Add water to cover, then drain and squeeze water out of bread. (If using stale bread, let it soak in the water for a few minutes.) Add bread to work bowl of food processor.

Refrigerate at least an hour, or overnight. Taste before serving and adjust seasoning as needed.

To serve, chop remaining tablespoon of sun-dried tomatoes and sprinkle on top of each bowl of gazpacho.
Posted by Darienne at 9:01 AM No comments: