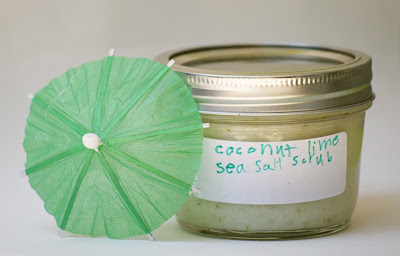 Every parent I know is running around like a chicken with its head cut off this time of year. Spring sports schedules, a rush of field trips to chaperone, a string of special programs to attend at school... And don't forget about gifts for Teacher Appreciation Week and the grandmas for Mothers Day — both of which take me by surprise every single May.

The best gifts for teachers, grandmas, and other special people in your child's life of course are ones your child can help make. Extra credit goes to homemade gifts that are fast, simple, and fun.

I'm guessing that at this time of year, many teachers dream — as I am — of chilling on a tropical beach with something frosty in hand. I'd love to give my son's teacher a margarita, but this Coconut Lime Sea Salt Scrub probably is more appropriate. It gently exfoliates and moisturizes to get your skin beach-ready, and the scent transports you to the tropics. A little jar of this will help your hardworking teacher cope with the crazy final days of school.

Enlist your little one to help mix this glorious goop. It's technically edible, but I wouldn't recommend nibbling any. For better-tasting gifts kids can help make, a few of our go-to recipes: 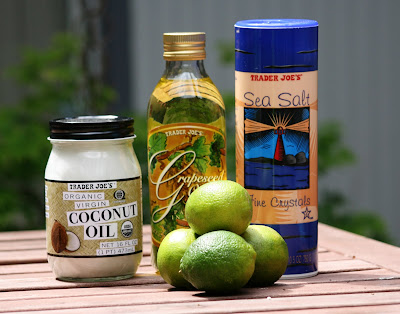 
Given the high salt content, this should last for at least a few months. I store homemade scrubs in the refrigerator to be on the safe side. This recipe makes about 3 cups. If you prefer a sugar scrub, swap brown or raw sugar for the salt and use equal amounts of oil and sugar.

Gently heat the coconut oil in a saucepan or the microwave until it's just softened—you should be able to stir it easily. Stir in the grapeseed oil.

In a medium bowl, combine salt and lime zest. Stir in the oil and a squeeze of lime juice. (Because it's coconut oil, it will become much firmer when it's cool.) Package in cute jars and let your child decorate them.

To use, scoop up a bit of the scrub and rub on your fingers, feet, or body to exfoliate and refresh. Rinse thoroughly, especially if you use it on your feet!
Posted by Darienne at 4:17 PM No comments: 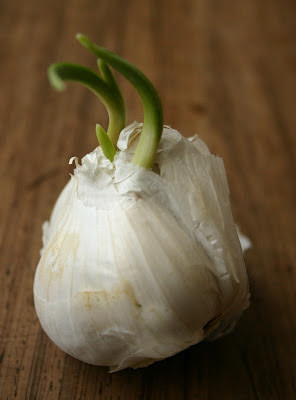 I was planning to write about something else, but a nice reminder on Facebook brought the news that Thursday was National Garlic Day. In my mail box, other food bloggers reminded me that Sunday is Earth Day. So, we should celebrate accordingly with earthy food! Right?

I wouldn't care to change my original post if it was Onion Day, because, honestly, I just love garlic so much more than I love onions. And I am a believer that Earth Day, as Garlic Day, could be celebrated every day. Earth is such a great home for us... 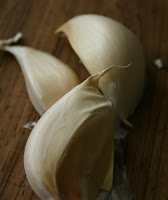 Garlic is omnipresent in most of my recipes, and my kids usually go for second servings, even when they are pretending to be on a hunger strike. You can find many recipes here that are garlicky—some of my favorites are:
Cranberry Beans with Brown Garlic Sauce
Lemon Balm Pesto
Broccoli Lemon Zest and Almond Pesto
Crunchy Green Beans 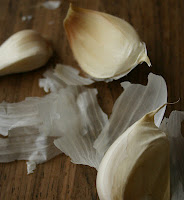 Pasta with Garlic and Olive Oil


This recipe is always welcome here, and it's  kid-approved. You can always personalize it with a seasonal green (like spring onions or tips of broccoli florets) or a different type of pepper.


Prepare pasta as directed by package instructions, subtracting 2 minutes from the cooking time to guarantee that it will turn out al dente and not mushy.

On another burner heat half the olive oil in a medium skillet. Add garlic, lower the heat, and stir for about 3 minutes or until the garlic starts to brown. Set aside.

When pasta is cooked and drained, heat the skillet again over medium heat.  Immediately add the pasta to the still-hot skillet with the warm oil and garlic (you can also remove the garlic and use just the infused oil). Add the rest of the olive oil, freshly ground pepper, sea salt, and lemon zest.

Carefully turn pasta in the skillet so it's coated with oil and seasonings.  After about two minutes, remove form heat and serve it straight away. If you love more flavor,  top it with pecorino cheese.
Posted by Anna at 10:33 AM 2 comments: 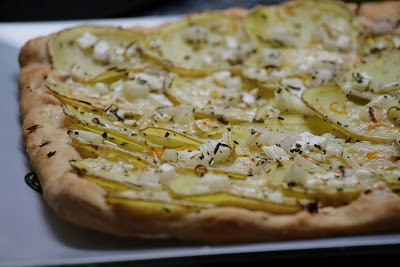 My last trip back east took me to far western Massachusetts — too far west, alas, to grab a few slices from my beloved Antonio's Pizza in Amherst. My sainted younger sister came to the rescue, arriving at our family home with boxes of my favorite slices: chicken parm, tortellini, potato and more.

I fell in love with potato pizza at Antonio's, which conveniently opened my freshman year of college. Antonio's has since expanded to a few locations, but I still live a 30-hour drive from the closest one.

Their potato pizza is so good, I've been reluctant to try to replicate it. Then I  came across Jim Lahey's much-publicized potato pizza and decided it was time to give it a shot.

His version is very simple: potatoes, rosemary, onion. I dressed it up with lavender, lemon zest, and a bit of cheddar-Gruyere cheese, popped it in the oven, and then thoroughly embarrassed myself in front of my dinner guest because I couldn't stop shoveling pieces into my face. 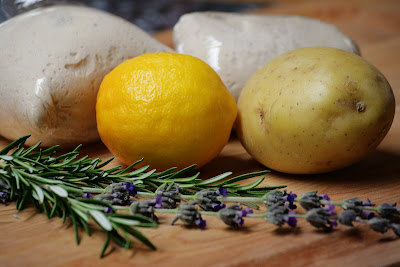 Lahey — who shot to fame spreading the gospel of no-knead bread — is back in food blog headlines with his latest cookbook, My Pizza. I had mixed results with his bread recipe, but this pizza dough... wow. I'm sold. It makes a delightfully crispy crust and it's very easy to work with. (Check out this video for tips on shaping each pie.)

You mix up the ingredients with a spoon, using just a smidgen of yeast, and let it sit for 18 hours. And that's pretty much it.

I mix mine before going to bed early in the week, and the next day after school I divide it into four pieces, wrap each in plastic wrap, and stash them in the refrigerator, ready to go for make-your-own pizza Friday nights.

Potato pizza is delicious straight from the oven or at room temperature. Purple potatoes would make this a jaw-dropping spectacle, but I haven't tried it yet. (I will soon!)

One last tip: If you make this for kids, do not call it a pizza. If you do, they absolutely will not eat it because it does not have red sauce and it isn't covered in oozing cheese. Call it a potato chip tart. 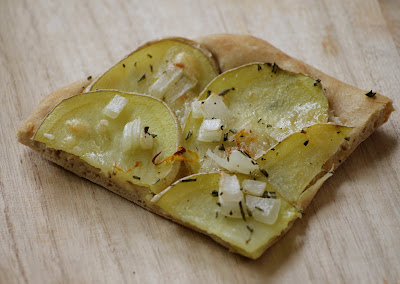 
Adapted from Jim Lahey. Be sure use culinary lavender that hasn't been sprayed with pesticides. If you can't find trustworthy lavender but do live near Trader Joe's, try using their Flower Pepper, with rose, lavender, and calendula in the mix. It's a great finishing touch for simply prepared veggies, too.  I'm including a link to the dough recipe; it's widely published online, but I don't want to lift it entirely from his book without explicit permission. Finally, measurements are loose here: I just grab a few sprigs of herbs, chop, and sprinkle until it smells right. Trust your instincts.


Slice potatoes thinly, using a mandoline or a knife. Fill a bowl with cold water, stir in a few shakes of salt, and add the potato slices. Let them soak at least half an hour, or up to 12 hours in the refrigerator.

Preheat oven to 475 degrees. If you’re using a pizza stone, be sure to put it in the oven as it warms up.

Drain potatoes and pat dry with kitchen towel. Combine potatoes and onion in a bowl, drizzle with olive oil, add a few grinds of pepper, and stir to combine.

Prep your pizza dough: You can lay it out on a cornmeal-covered pizza peel or a greased cookie sheet. Lay out potato slices atop the dough so that they overlap slightly. Scoop up any leftover onion from the bowl and sprinkle it over the potato slices. Add cheese, then sprinkle rosemary, lavender, and lemon zest. Season the pizza with a bit of salt, if desired, and a light drizzle of olive oil.

Bake on a lower rack in the oven for 25 to 30 minutes, until the crust and potato slices are golden brown and you can’t possibly wait any longer. Give it a minute or two out of the oven, then slice and serve!
Posted by Darienne at 11:13 PM 1 comment: 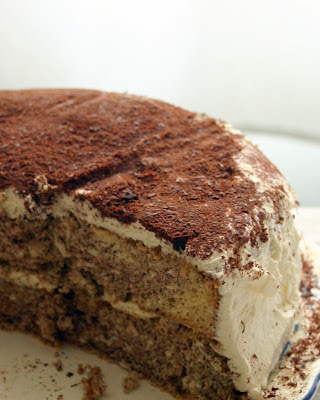 Easter and Passover are all about being with family, and this is exactly what we have here today: Lots of family.  This is a way of saying why this post is very, very late. I had a crazy busy week, as my kids did. Although I had very ambitious plans for the posts and recipes for the holidays, I was mostly entangled with some other stuff - like preparing the house for the arrival of  the kids' grandparents and uncle and future auntie, to stay here with us for Passover and Easter.

Lucky us — the delay brought me a sweet and delicious surprise: This new recipe, tested yesterday, was brought by Hila, one of our guests who is going to get married to my brother in-law, Michel, in July.

The most important  for me — as we have a interfaith family — is to keep both traditions alive, and for that we wouldn't save energy to bring the best of our cultures to the table. For that reason, each of the families brought a grandmother's recipe. We tasted a classic matzo ball soup made by my in-law, following her mother's most successful recipe, and all the staples like gefilte fish and a Moroccan version of charosset.

With no doubt the star of the night was Hila, who was kind enough to allow us to share this amazing cake recipe with us and now here. Happy Passover, and Happy Easter.


Hila's Grandma Cake
We adapted the recipe from Hebrew to English with the amazing help of our mother-in-law. 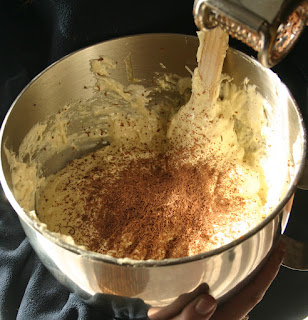 
Preheat oven to 356 F. Coat two round cake pans with canola oil. In one bowl of a standing mixer beat egg whites with half of the sugar to soft peaks and set aside. In another bowl beat egg yolks, oil, and the other half of the sugar, and gradually whisk flour and baking soda sifted together. Mix coconut and then fold into the egg whites. Grate dark chocolate into the mix.

Divide batter between the two cake pans and bake for about 30 minutes, checking for readiness with a toothpick after about 20 minutes.

While the cakes cool, whip the cream with the vanilla extract and sugar. Top one cake with whipped cream and set the the other cake on top. Spread whipped cream over cake and grate more chocolate on top. Refrigerate for a couple of hours before serving.