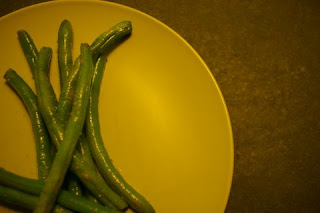 There I was for the first time in Paris on my late 20's when I heard a French friend describing her recipe for Haricots Verts. Her enthusiasm puzzled me. I was asking myself how a simple vegetable -- even with that elegant name -- was considered so amazing... It took me more than a decade to unveil something similar to that recipe and to understand all the goodness and charm of fresh green beans, and their similarity to the French variety, the sleek Haricot Vert.
So, when I prepared green beans for Lunar New Year's potluck, thanks to Darienne,  who suggested the side dish but ended up preparing delicious prawns, I had all that memory of those irresistible haricots verts from my friend.  To add an Asian touch to the dish, I added rice vinegar and soy sauce.

During my search of green beans literature, I was amazed to find all about it. Green beans are loaded with vitamins, including the awesome Vitamin K, full of fiber, low in calories, and last but not least, full of flavor. Than I learned that it is considered a symbol of longevity for the New Year. And, for my surprise, a hit for my 3-year-old boy.  With all those nutritional qualities, texture and flavor, long life for green beans! From now on they will always be a favorite in my home, Lunar New Year and beyond.


The beans I bought were from Trader Joe's and came trimmed and washed. The main part of the process is never overcook the beans if you want to experience the irresistible crunchiness they bring to a plate.


Cook beans for about 6 to 8 minutes on medium heat with a tablespoon of water, or enough to cover the surface of the pot. If beans are from a ready-washed and trimmed package, follow the instructions for cooking, choosing the minimum time. Transfer to a heat-proof dish  and while still very hot add all seasonings and mix well. Cover and let it stand for at least 2 hours before serving. It can be reheated for about 3 more minutes or served at room temperature.

We love green beans -- especially yard-long beans -- tossed with a bit of olive oil and roasted on a baking sheet. Our absolute favorite is to finish them with some sweet chili sauce. Mmmm.

I haven't done the Asian flair before. I always do them Italian/Spanish style with sauteed onions, garlic, and tomatoes. Something new to try!