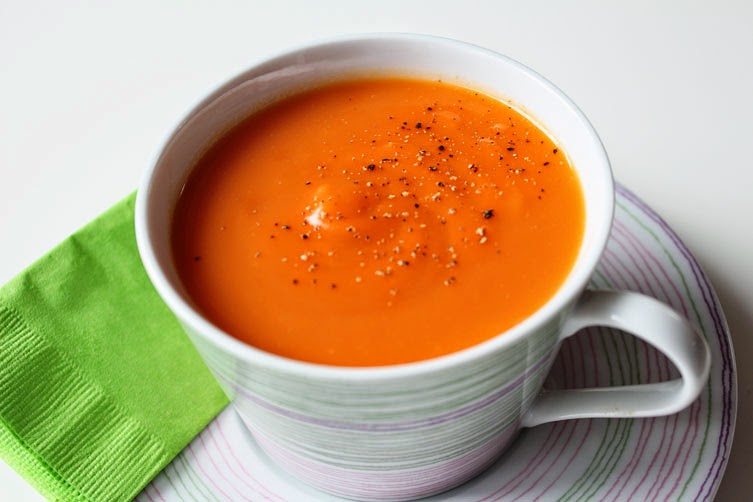 This is a light, fresh soup just right for spring. You can pull it together in minutes with just two pantry basics: a sweet potato and a can of coconut milk, which adds creaminess without overwhelming the flavor.

Add a little something extra — a touch of vinegar, a stalk of lemongrass and some time, if you have it, or a few drops of hot sauce — and you have a refreshing soup that's a perfect bridge from cold-weather curries to summertime gazpacho.

I threw this together after coming home from a long holiday to a mostly-empty pantry. Spring showers called for soup, but all I had for veggies were some lettuce and a lone sweet potato.

I zapped the potato in the microwave, opened a can of light coconut milk, and pulled a stalk of lemongrass from the garden. (I know, lemongrass is hardly a pantry staple. But if you have some, use it!) Everything went into a pot for half an hour, and I stirred whenever I passed through the kitchen. A splash of vinegar and a squeeze of lemon, and it was ready to go.

The result is a little sweet without being cloying — the vinegar really elevates the taste. Adults and spice-happy kids might like it with a drop or two of Sriracha. This one is definitely going into regular rotation: Even my coconut milk-averse, sweet potato-hating husband liked this and helped himself to a second bowl. (He says it doesn't taste like sweet potato; I say it does, and he just hasn't given sweet potatoes a fair chance.) 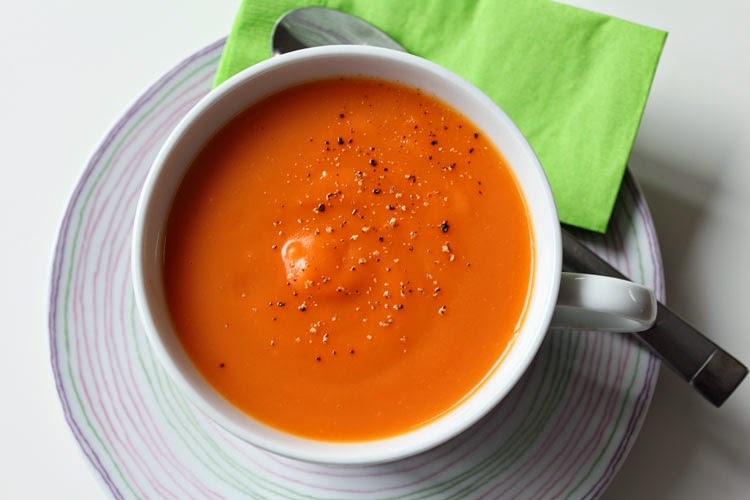 
To cook a sweet potato quickly, prick it several times with a fork and set it on a plate in the microwave. Cook on high for 8-10 minutes until soft, turning once halfway through. Let cool and peel.

The vinegar and lemon/lemongrass aren't essential, but they elevate this soup from good enough to mighty tasty.

Stir together mashed sweet potato, coconut milk, and water in a saucepan over medium heat. Add lemongrass stalks, if using. Warm to barely a simmer, stirring occasionally. If using lemongrass, keep on the burner for 20 to 30 minutes, then remove the lemongrass stalks.

Purée soup with an immersion blender (or blend in batches, carefully, in a blender or food processor). Stir in vinegar, a teaspoon at a time, until it has the right amount of zip to suit your taste. (If you're adding lemon juice, this is the time to do it.) Season with salt and pepper. If it's too thick, stir in a little more water, broth, or coconut  milk.

Optional:  Serve with Sriracha for those who want to add a little more heat.
Posted by Darienne at 5:00 AM 2 comments: 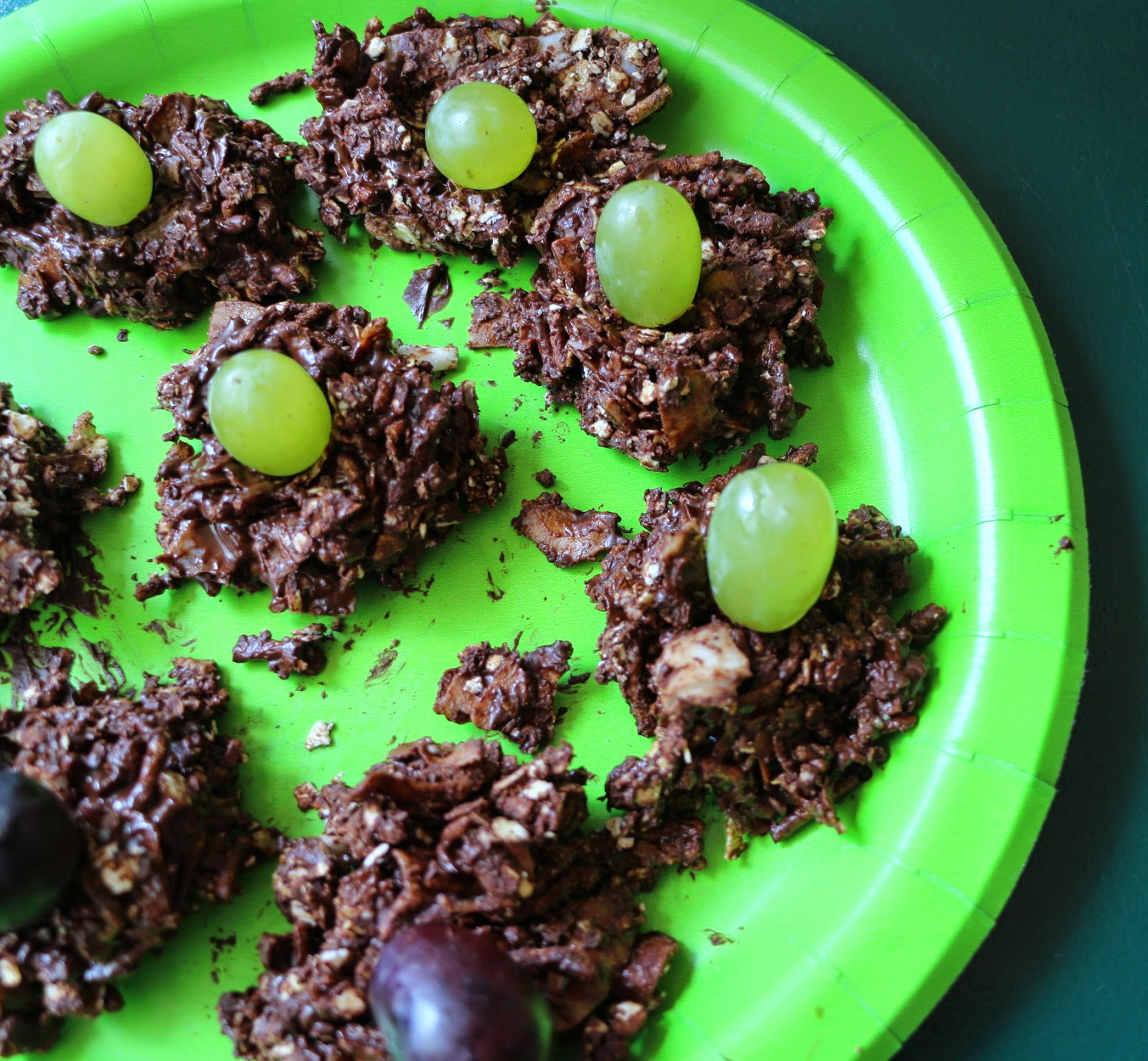 Hello Spring! This might be a great way of using leftover chocolate bits and pieces (aka broken and forgotten easter eggs) and make them part of a healthier treat. The first version is the one I made with kids at school: just a swirl of melted chocolate ove a nest of grains and mashed banana, and grapes are pretend-to-be eggs. The second, made with leftovers of the project is based on lots of chocolate biding grains and coconut. It was a nice way to celebrate Earth Day and shape the clusters like little planets. Just choose yours and play with the imagination to make your nest a unique piece of art. 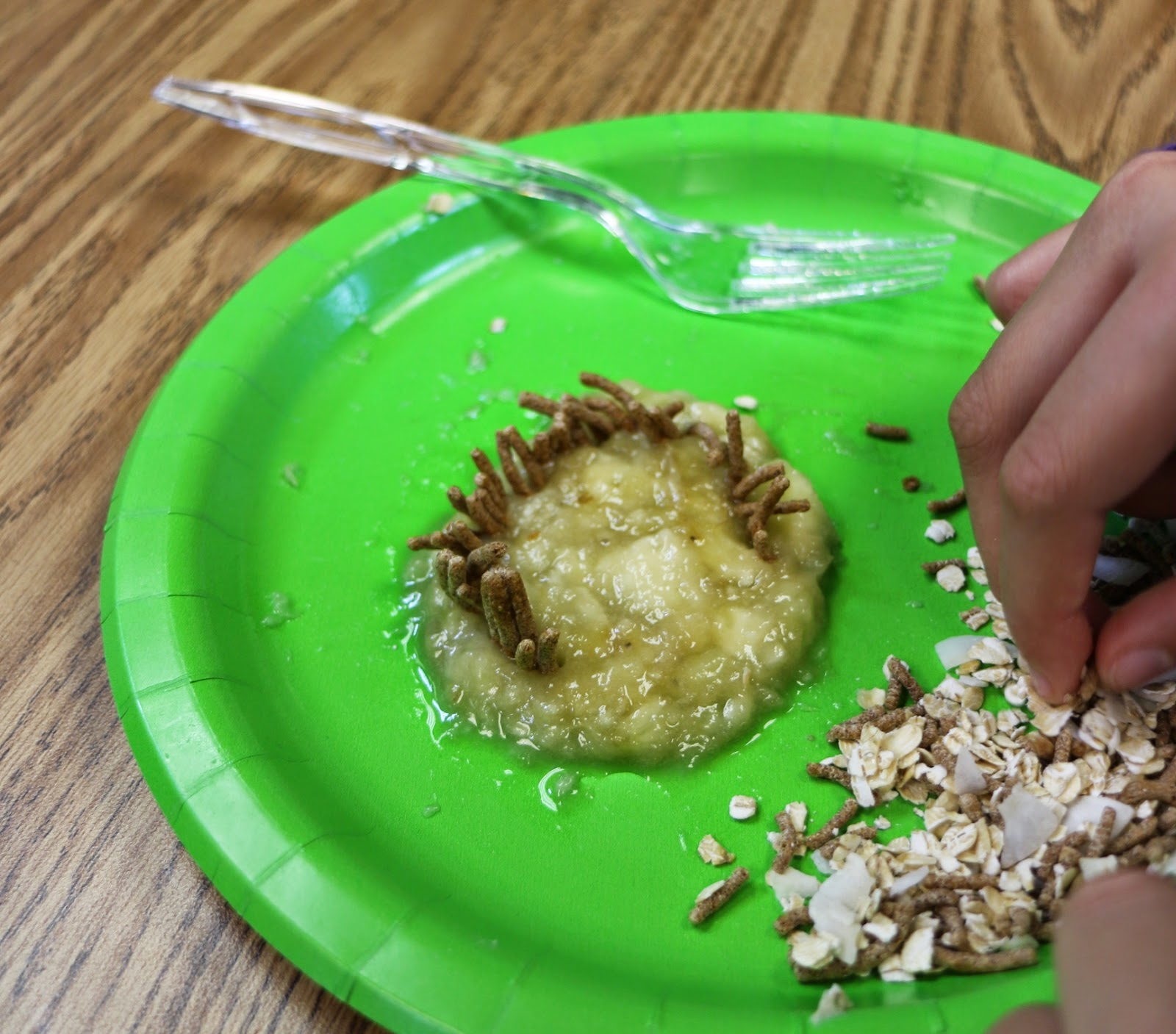 Before beginning to mix and shape, melt chocolate chips on a double boiler (my favorite process), or in the microwave (70% power stirring every 30 seconds up to when chocolate is totally melted and ready to swirl. 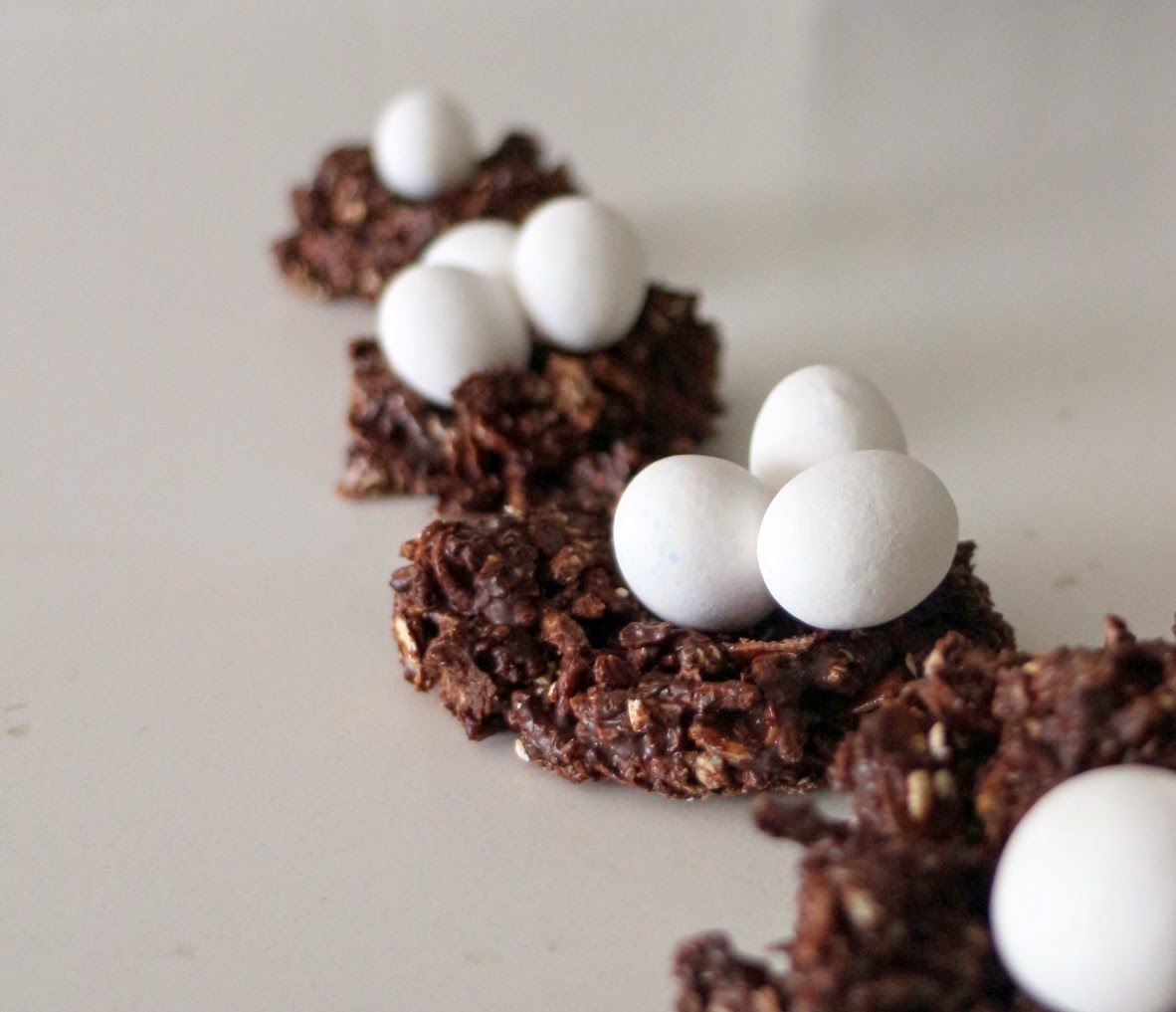 Mix all dry ingredients. Mash bananas on the plate to make the base for the clusters, nests or planets. After adding cereal mix  shaping bind with a swirl of melted chocolate. If your choice is to make just the cereal chocolate shapes, forget the bananas and fold chocolate into dry mix. Shape with the help of two spoons or inside a baking cup, and let it sit at room temperature up to when chocolate is back to solid.  Decorate with grapes or chocolate candies.
Posted by Anna at 12:50 PM 1 comment: 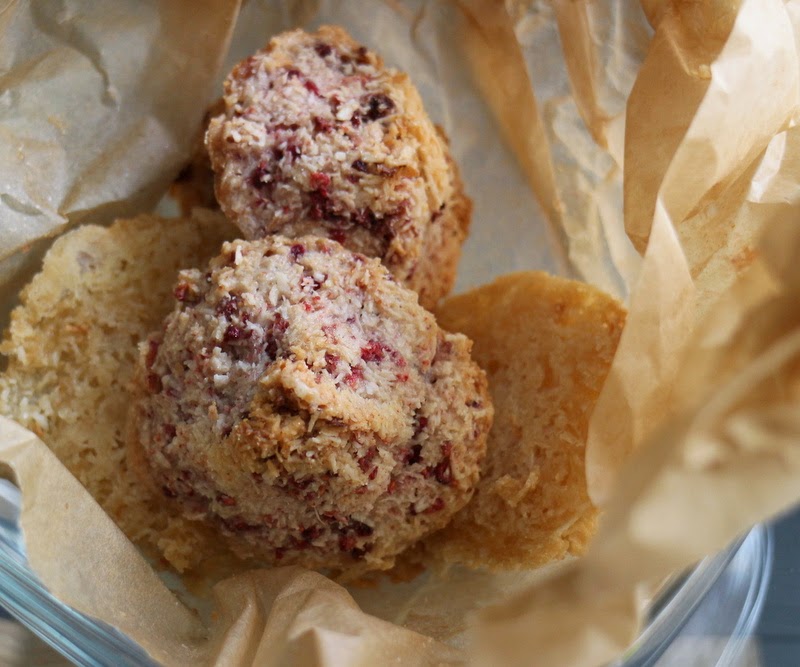 It's the last night of Passover and I've been cooking so much for these holidays that I didn't have time to sit quietly to share my latest recipes here.
Belonging to a interfaith family has its advantages but sometimes is just plainly overwhelming. It's great that Passover lasts for 8 nights, so that we can keep trying new recipes and variations over some staples, like matzo balls soup and gefilte fish.
I made theses sweet treats for the first night of Seder when we had some friends and family over, and despite of the extreme sweetness, it just almost vanished from the table. This photo was taken today, with some hidden in the fridge goodies.
Usually guests bring these as dessert but at this time I just thought it would be nice to make them anyway. For my luck they were the only macaroons on the table, so no competition - and absolutely one of the items that I will incorporate to my family's tradition. They are good on their own or topping a scoop of vanilla ice cream.

Raspberry Coconut Macaroons
This is a variation of Mark Bittman's recipe. I added and substituted some ingredients and needed to adjust some of them, as I added more texture with the dried raspberries.

Preheat oven to 350 F. Line a baking sheet with parchment paper. With a wired whisk, beat eggs with salt up to very soft peaks. Slowly fold in sugars and orange oil, and finally coconut and ground raspberries. The mix will look very dry.  Using two teaspoons, lay each macaroon on the baking sheet, and shape them like pyramids with wet hands. Bake for about 40 minutes or up to when peaks are looking slightly charred. Cool down on a wired tray and transfer to the fridge up to when serving.