So it's Earth Day, and to celebrate this planet we are going to do eat a big bird and decorate a mud-cake with animal crackers! So, what about a staple form a restaurant and chocolate cake from the box with some twists?

My favorite house of hamburgers has a hidden yummy treat in its menu. It is the Turkey Chili with Scallions and Cranberries. Every time I think about the indecent amount of fat and carbs I would input in my system after devouring a burger, I order this treat instead. It takes longer to be eaten and always gives me lots of comfort. So, today, I will share this easy making dish with kids and moms.

This was a very simple playdate lunch with a high success rate; all kids and grown ups ate it and some even went for second helpings. And the dessert ... was another story. 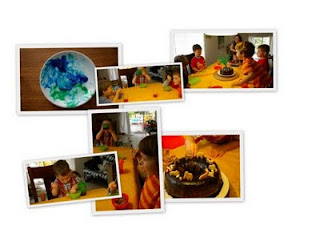 This dish can be prepared at the night before. It becomes even better because of the infusion of flavors. Also, some Tabasco or other kind of hot sauce will be a good addition when serving the dish.

In a big pot or pressure pan stir fry onions and turkey in hot olive oil. When all begin to turn golden brown add salt, pepper, cumin and pour tomato sauce and water. Add beans and mangoes and mix to combine all ingredients. Close pan and let it simmer for 40 minutes with a lid if using a normal pot. If using pressure pan, go for 25 minutes. Garnish with spring onions and rice on the side.
Posted by Anna at 10:31 PM No comments:

This is my take on Jerry Traunfeld's Smoky Tomato Bean Soup. I rarely have great bacon on hand — I have a hard time controlling myself with bacon, so I usually have low-sodium turkey bacon in the fridge. It worked well enough here. Traunfeld's recipe calls for a hearty dose of smoked paprika, but there was none left in my spice cabinet. I substituted chipotle chile powder — much hotter, of course, but a very little goes a long way. I added just a dash and set the spice on the table for diners to add if desired. The sage brings a lovely earthy note to the soup, and a dash of liquid smoke, magic in a bottle, deepens the flavor.

Cook bacon in olive oil over medium heat in large saucepan, stirring often, until it renders and begins to crisp. Pour off about half the fat. Add onion, sage, garlic, and chile powder and continue to cook until the onion softens, a few minutes longer. Stir in the tomatoes and salt, then partially cover and simmer for 30 minutes. Stir in the oregano and beans. Season with salt, pepper, and liquid smoke to taste.

The spindly sage plant just outside my front door has been enjoying the warmth of spring, setting out new leaves and transforming from woody twigs to lush, leathery, green-leaved branches. But it’s still early spring, and today was a breezy, cool exception to the warm weather we’ve been enjoying. I needed something to bridge the seasons. The garden bounty is meager: a handful of carrots, some small lettuce heads, cabbages, spring garlic, a few herbs, and a dismaying amount of re-seeded chamomile and rampaging mint taking over empty beds.

I decided to focus on herbs and turned to Jerry Traunfeld, whose simpler recipes have proven tasty and readily adaptable. I went with chicken piccata, a quick-cooking dish with an easy sauce. Traunfeld’s original recipe calls for dill as a primary flavor, but dill and I don’t get along. I used a mix of English and lemon thyme for the sauce, accenting the lemon zest and juice — it seemed the right note for spring. I followed Traunfeld’s recipe exactly, but the chicken lacked oomph. It was partly my fault for rushing to put the chicken in the cast-iron pan before it was hot enough. When I tried it again a few nights later, I made sure the pan and oil were hot, and I dredged the chicken in white whole wheat flour first. Perfect.

I needed another dish with strong herb flavor to lead into it. I opted for the sage, whose earthy flavor lends itself well to more traditional cool-weather dishes. I played around with Traunfeld’s Smoky Tomato Bean Soup: Wow. Yum.

Place each chicken breast half between 2 pieces of plastic wrap and pound gently until 1/4-inch thick. Cut each piece in half. Dredge pieces briefly in flour, shaking off excess. Season both sides with salt and black pepper.

Heat olive oil in a large skillet over medium-high heat until the oil begins to smoke. Place the chicken breasts in the oil and cook until lightly browned on the underside, 2-3 minutes, then turn and brown the other side 2-3 minutes or until fully cooked. Transfer chicken to a plate and keep warm.

Pour off any oil in the skillet, then pour in wine, stirring to loosen any browned bits in the skillet. Cook over medium heat until the wine is reduced by half. Add the lemon zest, juice, and butter; stir until butter is melted and incorporated. Stir in herbs; add salt and pepper to taste. Spoon sauce over chicken to serve.

Optionally, add 2 tablespoons drained capers to the sauce with the wine.
Variations
Replace thyme with your favorite herbs, alone or in combination.

Posted by Darienne at 8:23 PM No comments: