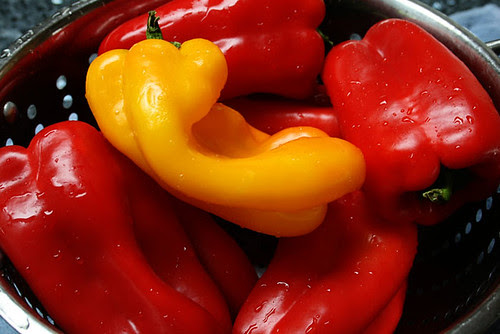 Sweet, colorful peppers have been a bargain lately at my local market, available for a fraction of their usual price. I scooped up a bunch and, with just a bit of work one evening, had myself a nice stash of roasted and marinated peppers.

They're ridiculously easy to make, and when you get fresh peppers for a good price it's more than worth the minimal effort to prepare them yourself. You can use your roasted peppers right away, put some up in the freezer, or make your own custom jar of marinated bliss.

Roasted peppers are a surefire way to jazz up almost any savory dish: toss some with pasta, add them to a frittata, put them on pizza, layer them on a sandwich, purée them into a dip, enjoy them as antipasti, sprinkle some into steamed veggies, serve them with simply cooked meats ... They're a delicious and versatile accompaniment. 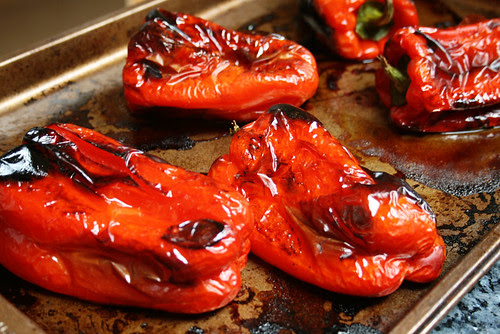 
If you have little ones who don't mind handling slippery foods, enlist their help slipping the charred skins of the cooled peppers.

red, yellow, and/or orange peppers
olive oil
Preheat broiler with the rack near the top of the oven. Oil a baking sheet, or cover the sheet with foil for easier cleanup. Wash and dry your peppers and set them in a single layer on the prepared baking pan, leaving a little space between them.

Broil peppers, making sure they're just a few inches from the top. Check them every few minutes, using tongs to turn the peppers as their skins char and blacken — in my oven, it takes about 20 minutes.

When peppers are well charred on all sides, remove them from the oven and immediately put them in a bowl. Seal the bowl with a lid, plastic wrap, or an inverted plate and set it aside for at least 15 minutes. (I let mine sit for up to an hour.)

When peppers are cool enough to handle, peel them over a bowl to collect the deep, rich juices. Use a knife to scrape away the stem, seeds, and membranes. Discard these and the blistered peel. 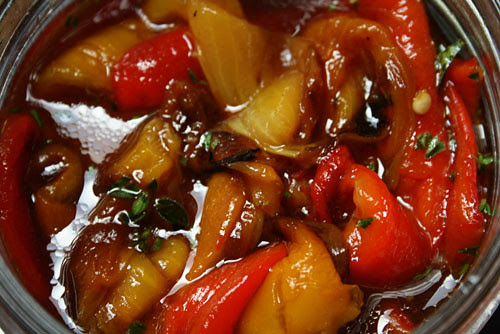 To store for a few days: Refrigerate the peppers in their juices and a little olive oil for a couple of days.

To freeze: Wrap portions of peppers in wax paper. Set packets on a plate or tray and put in the freezer for a few hours, then store individually frozen packets in a bag in the freezer.

For marinated peppers: Put peppers and juices in a jar. Add lemon juice or vinegar, olive oil, and fresh herbs such as thyme, basil, or oregano, plus salt and pepper. Garlic cloves, capers, olives, and mozzarella cubes are all terrific additions. The jar should keep about two weeks.

For fire-roasted peppers: Hold peppers — with tongs! — over a gas flame or toss them on the grill until charred, then put in bowl and follow the rest of the directions. 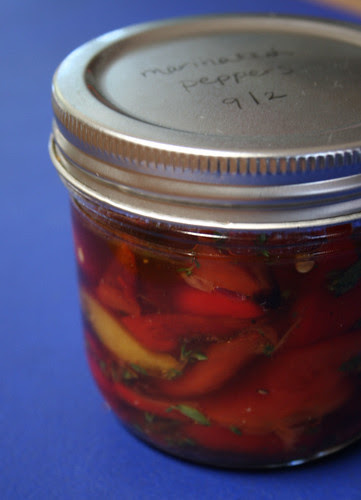 We've recently launched the site RecipesUS.com, where users can search through hundreds of thousands of recipes from American food sites and blogs. We noticed that you have a lot of delicious recipes on your blog and we would like to suggest you have a look at our site: http://www.recipesus.com/.

If you want to add your food blog to the list and have your recipes indexed on RecipesUS.com, all you have to do is follow these instructions: http://www.recipesus.com/add-your-food-blog.

Hopefully your food blog will be up there in the top!