Floating on a Vanilla and Blueberry Sky 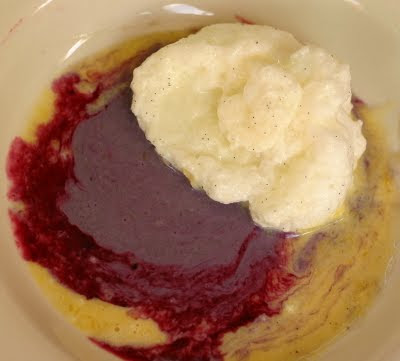 I grew up believing that making egg desserts was the ultimate kitchen challenge. My mom was always warning me about things going wrong. There was the deal with whisking the whites. Maybe funny stuff would happen to the yolks, and anything, really, could perturb the delicate chemistry that involves transforming eggs into delicious desserts.

Traditionally, in Brazil, many old-fashioned desserts are all egg- and sugar-based, inherited from the Portuguese school. They are all very lovable, and bring eggs to an elevated dimension. But there's always an exhaustive preparation process and somehow they are far too much sugary for my taste. Not to talk about the cholesterol dilemma.

None of that stopped me from playing with an egg dessert with my 4-year-old.  We were surrounded by clouds—in the sky, on my Mac screen, in our blog. So the project was named "Clouds Everywhere"—which included a book, some craft,s and a scientific experiment, during his (ouch!) first week off school. Off we went to find an idea for a dessert that would totally look like clouds. We loved Darienne's meringue clouds, but all of a sudden I recalled something my grandma used to make: in Portuguese we call it ovos nevados (something like "snowed eggs"). In French, they might be floating island (île flottante). For our project, we called it Floating Clouds.

The book we used for our reading was Nuvem Feliz (Happy Cloud, not translated yet to English, Editora 34, by Alice Ruiz and illustrated by Edith Derdyek). I also found that Eric Carle's Little Cloud would be beautiful, but didn't have time to order it or get it from the library. The scientific experiment was to make a cloud inside a bottle. And, of course, we did lots of cloud-gazing.


This recipe is lightly adapted from the book Europe's Master Chefs (Könemann, 2004). Many famous chefs love to talk about how they make this dessert, but I chose the classic method and ruled out thickeners (cornstarch) or egg stabilizers (tartar). Making it my way, I had a few challenges. But it's mainly easy. Easier that I thought. 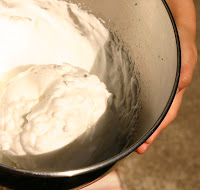 Combine milk, halved vanilla pod, and 3 tablespoons of the sugar in a large pot. Bring it to a boil and lower the heat so the milk stays hot, but it don't let it boil again. Remove vanilla bean, scraping the pod.

In a mixing bowl, whisk egg whites to soft peaks. Gradually add the rest of the sugar and whisk until it has stiff peaks. With the help on a ice cream spoon, scoop the whites into "clouds" and delicately cook them in the hot milk, 3 minutes each side. They will inflate and, when cooked, will deflate a little bit. Set them aside.

After all the egg-white clouds or islands are cooked, stir egg yolks into the hot milk and keep stirring to combine. Pour the yellow cream through a sieve, to remove any bits of yolk, and transfer it to a serving dish. When cold, serve clouds individually on the fresh blueberry coulis and vanilla custard, so that kids can paint their own sky.
Posted by Anna at 8:00 AM