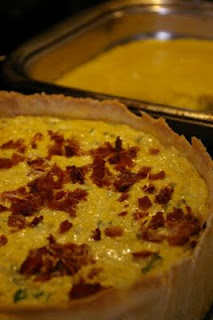 Our adorable Juju, the black cat, was not to be found early on that cold morning of Friday, November the 13th. Yes, that could be the beginning of a laughable mystery short story. Or better, just the gloomy start of an eventful time before a lunch playdate. I spent more than half an hour looking for our capricious feline, instead of using those precious moments on the mental preparation of our lunch, cleaning the house and developing even more my original recipe.

The house was uncommonly (more) messed up than ever. Plumbers were working outside, fixing irrigation pipes. No water for two hours. I thought that the food would overshadow that ongoing chaos. I prepared the filling for the quiche and also our unforgettable dessert on the night before. I just needed to do the crust and test a good recipe of polenta, which would be served as an appetizer for the main dish. That "just" was an irony.

The whole playdate was running smoothly. Some graffiti on the walls and on a side table were entertaining enough. My older son had hidden some Crayola with clothes, and on that morning he decided to share them with his dearest friends while I was trying to figure what the heck was going on with the quiche in the oven. In the meantime, broccoli was burnt at the Le Creuset and polenta got too cold in the fridge, and the clock was just running so fast! Things were not looking good at all.

But...The result was, after all, remarkable. Although kids mostly declined to eat the beautiful pie filling, just trying to get as much crust as they could grab, the flavor was extremely elegant. Homemade polenta was also great, even not being grilled, as it should be. But dessert called myself back to the senses. A friend brought a pomegranate that was added to my persimmon apple emulsion to accompany the pumpkin pudding at the last minute. But that is a story for the next posting, before Thanksgiving, of course.

In the meantime, black little miss Juju, the cat, was sleeping quietly on her basket. She was finally found before I began to cook on that cold autumn morning hiding under the new kid's bed, in a very improbable place. If I just had followed that clue my menu would be different. I would have started earlier, have easy food to prepare, aware that this was a Friday 13th!


I used canned organic butternut squash and canned organic pumpkin. That is just a shame: I had pumpkins all over the place on Halloween, but they all got spoiled before I noticed! So probably the recipe will work fine for the cooked fresh produce too.


On the night before mix ricotta and butternut squash. Season it with shallots, parsley and salt. Add egg just before baking.If using bacon, sprinkle it over bottom of pie. Some pieces of bacon and Parmesan Cheese may be sprinkled over filling. Fill the pie with ricotta and bake at 375 F for 30 minutes.

Mix flour, water and butter and knead with hands for an even dough. Make a ball with the dough and take it to the fridge for at least 1 hour. Stretch it on a 9 inches round cheesecake pan, making sure that a fine layer is going on all edges of the pan.
Posted by Anna at 8:35 AM