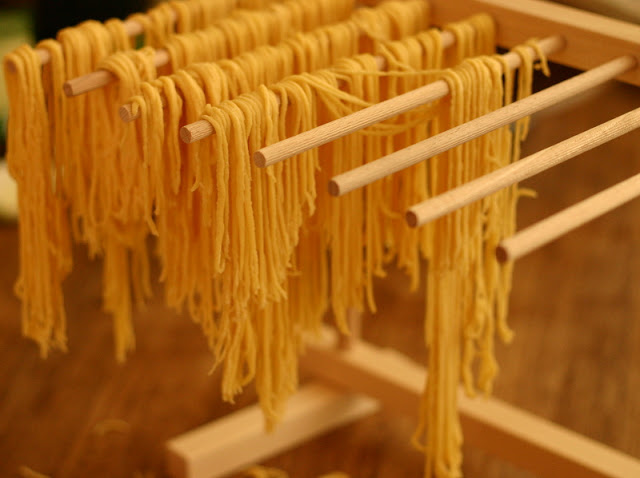 Lots of flour, raw eggs, rolling pins and pasta machines. About 24 kids ready to prepare the meal. Sounds like a party...  Or a huge mess? I would say that ... this is a delicious messy party!

This is the final week of Cooking Club at my son's school, and to celebrate a great year we are making pasta from scratch with the kindergartners and first-graders. Yes, it might sound ambitious and maybe exhausting. But the result has been awesome as we already tested it with two groups of kids. They just loved it. 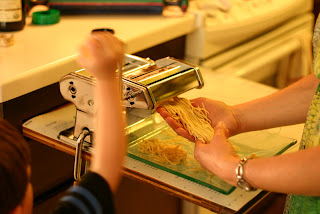 The first time we made it was a few weeks ago with our boys — the photos here are all from this private rehearsal.

Darienne is so good at kneading we even went for a second batch using the fashionable farro flour. The boys were, by that time, more interested on making ice cream. But they finally surrendered to the wonders of the machine, and of course couldn't stop eating when the pasta was ready — some used red sauce and others homemade pesto.

At school, kids were excited about the whole process. Kneading the dough was a great way of keeping them busy — they compared it to playing with playdough, and using the rolling pin was even more entertaining. When they finally got to use the pasta machine, they were mostly anxious, and somehow ready to eat.

While waiting for the pasta to be ready, they listened to the very amusing story of Spaghetti Eddy by Ryan Sanangelo and Jackie Urbanovic.

When they had their bowls in front of them, they were proud to know how pasta is made — and how it takes so much energy to be ready. The reviews were mostly wordless:  There was an unusual silence while they were eating, and empty bowls of pasta were left behind as there were lots of smiles imprinted on my memory. Both recipes follow the basic recipe that is on packaged of Bob's Red Mill, the brand I use for the semolina flour. I bought farro, imported from Italy, in a local store. Both are awesome, although we used the semolina recipe at school, which was a great hit. 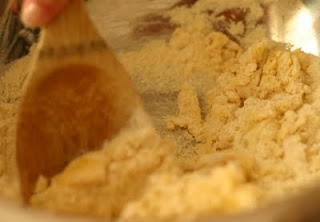 Bring a large pot filled of water and with a bit of olive oil to boil. Leave it at low flame.

In a very large bowl, combine the flours and salt in it, mixing well. Make a hole — or a well — in the center of the bowl. Add the eggs carefully and slowly beat them with a wooden spoon, gradually incorporating the flour.

Carry on mixing until all is incorporated. Start dropping in water and olive oil slowly while mixing. This will look like a coarse meal. Start kneading to form a ball of dough. If it is still too dry, add drops of water and oil up until a ball is formed and the dough is elastic and slightly stiff. Work on the dough for about 10 minutes. Push, stretch, pull and what else you feel like — it's a good kneading therapy. Or ask for the help of the kids, as this takes a lot of energy!

When the ball of dough feels elastic and able to stretch, sprinkle semolina flour on the work surface. Then, divide the ball into four parts. Stretch each one with a rolling pin until very thin. Then cut in rectangular shapes, making sure that the edge that will enter the pasta machine is very even. Insert that end into the machine. And now, off to turn up the heat on the stove to get rolling boiling water.

Start cranking the machine and the pasta will turn into nice strands of fettuccine or tagliolini. I have a Norpro machine, and it works just fine — although it does not make spaghetti, it does nice tagliolini. When all is ready, cook pasta in the boiling water for about 5 minutes to have a nice al dente texture. Remove and put on a colander. Serve it while still hot with your favorite sauce.
Posted by Anna at 5:08 PM

Do you recommend a particular pasta machine?

Hello there. We worked with a Norpro and Atlas machines. I like them both, and heard no complaints about their performance. So, I think it's all a matter of choice and reading more reviews. Thanks for visiting!

I am CEO of a residential program for homeless families with children in Florida. Also, love to cook and this is one gadget I am without & have wanted to purchase. Thought it would be fun to follow your lead with our kids.

That's wonderful! I think that cooking with kids is a amazing way of teaching so many things, from maths to geography... and having fun at the same time. I am sure you will also have a great time making it with your kids and the machine is a great tool! Thanks for visiting us here.

What a wonderful experience! I wish I could have been thre watching and taking part in this immensely pleasurable activity!
Nowadays, when the fast-food concept has taken over so many fields, it is uplifting to see someone in such an important praxis, and imprinting it in children's minds as a landmark for their lives!