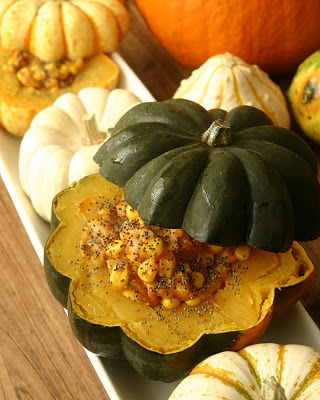 And then everything came to make sense: a Native North American classic inside a deliciously edible seasonal container.

One of my kids was not happy when he saw the "dead" acorn squash, halved and cooked, in front of him — it used to be one of his favorite good-looking squashes in his "pumpkin patch" on the rug. But soon he was convinced that the squash's fate was good, and ate all of his succotash. 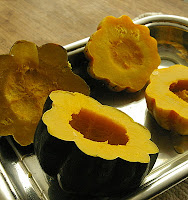 As you might know, succotash can be interpreted in many ways as long as corn and white beans are included to the recipe. I mainly played with seasonings to enhance the sweetness of the corn and squash while adding a bit of a European flavor with thyme and shallots.


Bake the squash while preparing the beans. It's a good idea to bake a whole batch of squash and sugar pumpkin to use in other recipes and freeze for later.

Bake squash halves, face-down in a baking pan with a half-inch of water, at 375 F for about one hour. You want them firm, so check after 45 minutes to see if they're ready — avoid overcooking.

While squashes are in the oven, prepare the filling. Shallow-fry shallots and garlic in olive oil over medium heat. Add thyme and tomato sauce and simmer for 10 minutes. Then add beans and sugar pumpkin and stir. Add salt to taste, and simmer for about 20 minutes. Serve beans inside the baked squash. Happy eating!
Posted by Anna at 10:41 AM